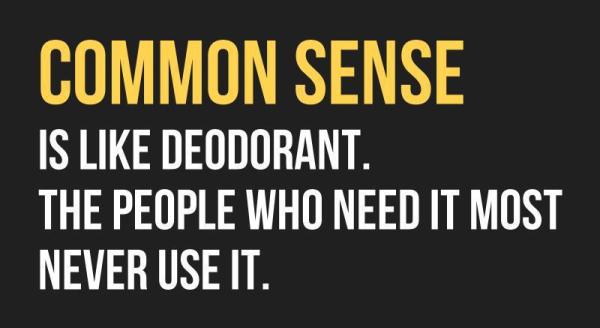 Adults and teenagers try hard to become smarter in every field but fail badly when it comes to common sense. There are many simple and easy questions people get wrong because they require your presence of mind and common sense but they go blank. However, the right answer can easily be found with the basic knowledge.

Have you ever given time to your common sense? Well, there are a number of online and written tests or brain teasers that are specifically made to test your common sense. Isn’t it the right time to beat it?

These tests are made by creative people who are smart masters and love to play with minds. A lot of times, the questions are on point but the answers are pretty funny. Yes, it just need the basic knowledge and accurate answers. Common sense questions are asked to calculate whether your logic is on point or not. Want to take the test now?

It’s time to exercise your brain. Then, why not an online test of few minutes? Let us determine the functioning of your brain and of course, the common sense. Time to think smarter. Can you answer all of the following questions correctly?

Below is a quick test consisting of multiple common sense questions. Be honest and answer quickly. Another tip is to prevent yourself from over thinking. Well, you can also ask these later with your friends to check their level of common sense. Right?

How many times you can subtract the number 5 from 25?

Answer: Once. After the first calculation, you will be subtracting 5 from 20, then 5 from 15, and so on.

Is it legal for a man to marry his widow’s sister?

Answer: No, because he is dead.

Two mothers and two daughters were fishing. They managed to catch one big fish, one small fish, and one fat fish. Since only three fish were caught, how is it possible that they each took home a fish?

If you were to put a coin into an empty bottle and then insert a cork into the neck, how could you remove the coin without taking out the cork or breaking the bottle?

Answer: Simply push the cork into the bottle and shake the coin out.

If there are fifteen crows on the fence and the farmer shoots a third of them, how many are left?

Answer: None. They all fly away after hearing the shots.

What is the easiest way to throw a ball, have it stop, and completely reverse direction after travelling a short distance?

Answer: Throw the ball straight up.

Before the Mount Everest was discovered, what was the highest mountain in the world?

Answer: Mt. Everest was still the highest mountain even before it was discovered!

Why is it against the law for a man living in North Carolina to be buried in South Carolina?

Answer: Because he is still living.

There are five oranges in a basket. How will I distribute the oranges to five people, such that one orange is still in the basket?

Answer: Distribute 1 orange each to the four people. And then give the fifth orange together with the basket to the last person.

How many animals of each species did Adam take with him on the ark?

Answer: None, Noah took the animals on the ark, not Adam.

Do they have a 4th of July in England?

Answer: Yes. Everyone has a July 4th.

How many birthdays does the average man have?

A woman gives a beggar 1 dollar and 32 cents; the woman is the beggar’s sister, but the beggar is not the woman’s brother. How come?

Answer: The beggar is her sister.

Why can’t a man living in the U.S. be buried in Canada?

Answer: He can’t be buried if he isn’t dead.

How many outs are there in an inning?

Two men play five games of checkers. Each man wins the same number of games. There are no ties. Explain this.

Answer: They were playing different people.

A man builds a house rectangular in shape. All sides have southern exposure. A big bear walks by. What color is the bear? Why?

Answer: White. It is at the North Pole.

If there are 3 apples and you take away two, how many do you have?

I have two U.S. coins totaling 55 cents. One is not a nickel. What are the coins?

Answer: A 50 cent piece and a nickel. Only one is not a nickel.

If you have only one match and you walked into a room where was an oil burner, a kerosene lamp, and a wood burning stove, which one would you light first?

How far can a dog run into the woods?

Answer: Halfway. Then it’s running out of the woods.

A doctor gives you three pills telling you to take one every half hour. How long would the pills last?

How many animals of each sex did Moses take on the ark?

Answer: None. Moses didn’t have an ark. Noah did.

How many two cent stamps are there in a dozen?

Answer: George W. Bush. Same as it is now.

There once was a lady who really liked pink. In her cozy, little one-story house, everything was pink. Even her dog was pink. Her hair, her carpet, everything. What color are her stairs?

Answer: She didn’t have stairs. It was one story.

There was an evergreen tree in the dark, ugly forest where ghosts, witches, and even Frankensteins lived. All of the sudden, a great gust of wind flew through the forest. Which way did the leaves on the tree fall?

Answer: It is a pine tree. It doesn’t have leaves.

After reading, Feel like you have an intelligent mind than other people? Are you present minded person who can tackle with every question in mini seconds? But, it takes hard efforts to answer tricky questions. Sometimes, intelligent people also fail to attempt common sense questions and answer childish.

Enjoyed? Don’t forget to share the common sense trick questions with your pals to check their common sense.