“Why did the chicken cross the road?”. Most of us have already heard this phrase a million times. Isn’t it true? Since our childhood we have heard this silly yet funny joke. Basically this is a common riddle joke with hundreds of simple answers, the punchline or answer could be: “To get to the other side” this is the very basic answer. It is an example of anti humorous joke. People might get curious and they might think that the answer will be a punchline but its answer is a simple statement of fact. This can lead to very simple statements but definitely fun for you to play. 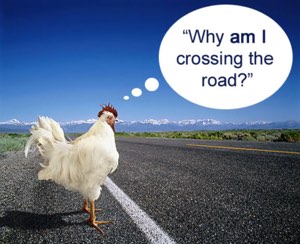 The riddle game is a very old game which started out of nowhere and it became popular among kids as well as adults because of its serious punchlines. You can play this game whenever you are getting bored as its a boredom killer. Not only kids love this game but adults also. It requires presence of mind because you have to extract an answer which should be a statement of fact but the listener will have fun to know the answer. Here are some of the examples associated to it:

Why did the chicken cross the road?

There are numerous funny jokes about why did the chicken cross the road. I decided to complete list of funny answers and jokes on this topic around the internet. I’m sure you’ll have some great fun reading it. 😉 Here’s a funny video to answer the question.

What are you waiting for now? Sounds interesting. Isn’t it? Then fasten your seat belts for a ride full of laughter . Have fun and thank us later!

She wanted to stretch her legs.

She was afraid someone would Caesar!

To get to the other slide.

There was a car coming.

She wanted to stretch her legs.

To prove to the possum it could actually be done!

The chicken cross the road in search of food.

to avoid lame and outdated jokes.

I don’t know, let the chicken mind its own bussiness.

To go to the idiot’s house.

because popeyes was on his side of the street!

so you could later make a website out of it !!

To get a life…Now its time for all of you to get one.

because chickens are really,really dumb.

because she saw what you did to her eggs

To prove it could be done!

To hold his pants up.

No-one knows, but the road sure was pissed.

Because this is AMERICA ! It can go anywhere it wants.

Because it was a fundie chicken.

Because it wanted to find out what those jokes were about.

Give me ten minutes with that chicken and we’ll find out.

Here are some of the interesting funny answers submitted by users in comments to why chicken crossed the road.

That’s all. If you want to add any joke or funny answer on why did the chicken cross the road? Feel free to leave a comment below.

35 thoughts on “45 Funny Answers to Why Did The Chicken Cross The Road?”

This site uses Akismet to reduce spam. Learn how your comment data is processed.